The Unfolder
HomeGamingHow to Hack Dinosaur Game in Google Chrome 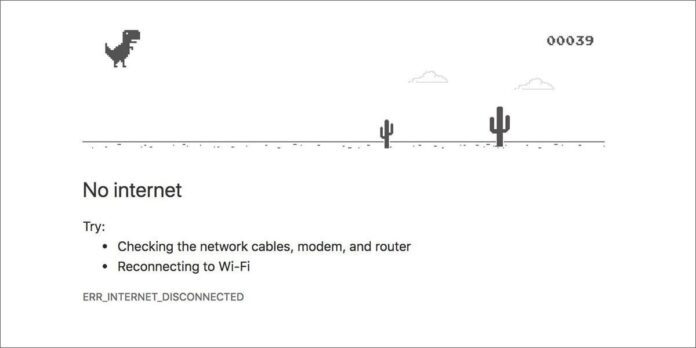 Everyone who has used Google Chrome must have seen a Dinosaur game when there is no internet connection. You must have tried to play the game for some time till the connection is not regained.

Since it’s a fun game, it would be cool if there’s any way to hack the Dinosaur game on Google Chrome to achieve a score that would leave your friends amazed. Also, you can show some hacks and different variations in your game that would leave them scratching their heads!

Also read: How to Change Your Background in Google Meet

Here, we will show you how to tweak the speed and jump and become immortal in the Dinosaur game to score unbelievable points easily.

The below-mentioned steps are cheats for the Dinosaur game that lets you reach unbelievable scores by making the Dinosaur invincible and letting it run without getting pecked by the birds or cactuses.

If you do not have an internet connection, then you don’t require anything else to play. Just enter any URL in the Google Chrome address bar, and you’ll see the game screen will appear with a “No Internet” message.

However, if you have an active internet connection and want to try out the game, you can do that. You have to type chrome://dino in the address bar, and the game screen will appear.

Once the game screen has appeared, you can start playing the game by pressing the Spacebar or Up button (arrow key).

Once hit, the game begins, and the Dinosaur starts running. This game’s only task is to avoid the obstacles (Cactus plants and Birds) coming in the path of the Dinosaur.

Also read: How to use Google services as a proxy to bypass restrictions

If you hit any obstacle, the game is over, and your score is shown. To avoid the cactus plant, you have only one choice, that is, jump using the Spacebar or Up arrow key. But to avoid birds, you can either jump over them or duck down using the Down arrow key. To pause the game, you can use the Alt key.

Hack the Dinosaur Game on Chrome

The Dinosaur Game is a good choice to kill time and have some fun when there is an internet issue.

You can see your previous high score and try to beat it without using any hack and playing legitimately. However, if you want to get an unbeatable high score, you may want to use some hack. Here’s how you can apply the hack:

Also read: How to view WhatsApp status without letting your friends know

After you have hacked the game, now the Dinosaur will run over the obstacles until stopped.

But the question is, how will it stop? Because now the game will not be over as the Dinosaur is not hitting any obstacles (technically).

So, here is the only way to undo the hack so that obstacles can be hit and the game gets over. You can undo the hack more easily using just one line of code.

Now, the game is back to its original state. So, as soon as the Dinosaur hits any obstacle, the game will be over.

After making the Dinosaur immortal in the game, you might be intrigued to try out something new. For starters, when you applied the immortal hack, you must have noticed that the Dinosaur’s speed remains the same as the original.

It is frustrating also as it is too slow in the beginning and increases gradually. So, to get high scores, it might take some time. But what if some way if you can speed up things as per your will. Wouldn’t it be kind of cool?

So, using the code given below, you can change the speed of the Dinosaur. As done earlier, you just have to copy the code and paste it in the “Console” tab from the Inspect menu.

Here, 20 indicates the speed you want to give. So, you can increase or decrease the value according to your choice. For example, you can also use a much higher value:

Also read: How to Remove Internet Explorer From Windows 10

After making the Dinosaur jump higher and increasing its speed, you might be wondering what else can you do.

Well, you can also modify the jump of the Dinosaur too. You can control how high does your Dinosaur jumps using just one simple line of code. As done earlier, you just have to copy the code and paste it in the “Console” tab from the Inspect menu.

Here, 10 indicates the height of the jump. So, you can increase or decrease the value according to your choice. For example, you can also use:

or a much higher value such as:

So, these were some simple and cool hacks you could use and have some fun. Enjoy!