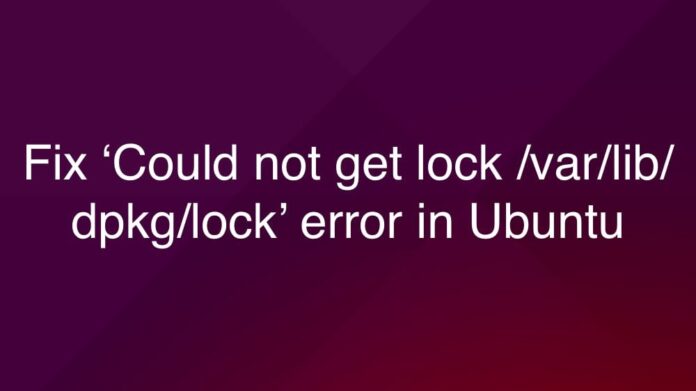 Let’s get one thing straight. I am NOT a Linux guru. However, I believe I am fairly conversant in tech, and as such, I am able to get myself out of a tricky situation with relative ease.

Perhaps that is why I can comfortably use Linux as my daily driver on my main machine.

Of course, over time, you get to learn tips and tricks that get you out of issues that you might, unfortunately, come across more often when using Linux as your primary OS.

One such problem is the annoying issue on your Terminal when trying to install a package, an error that says the system is unable to acquire the dpkg frontend lock’ or ‘Could not get lock /var/lib/dpkg/lock.’

This can be a scary message to get on Ubuntu and Ubuntu-based Linux distros, but it is nothing to get too worried over.

So why is this happening? You ask. Well, this may happen for a number of reasons like:

This can be loosely equated to the error on Windows when trying to install two apps at the same time. That said, the best way to deal with this is to allow time for your system to complete the process that is causing this error.

If you feel like this is taking too long, which is probably why you’re here in the first place, simply open a new terminal session and run the following command:

This will suspend all the running processes on your system. However, if it doesn’t work, then you can remove the lock files.

Run the following commands one by one to remove the lock files:

After this, you will need to reconfigure the packages. To do this, run the following commands in Terminal:

That should do the trick. However, if it didn’t work, then here are a few other solutions that you can follow to solve this problem.

If you’re on Ubuntu, then the error message might appear similar to the following:

What are lock files? You ask? Well, these are created to prevent two instances of apt or dpkg from using the same files at the same time.

To delete the lock files, you can use the rm command. Copy and paste the following lines to your terminal one by one:

Removing these files should fix the error.

A more targeted approach would mean that you try to fix the specific problematic service that is causing this error on your Linux.

1. If you have a mystery apt or dpkg service running, terminate it and see if that resolves your error. Use the following command:

2. Replace 8898 with the actual process ID (PID) from Step 2. It should complete and return to a new command prompt line. If it doesn’t, force the process to stop by adding the -9 option:

Chances are, one of the above-mentioned methods will fix your dpkg frontend lock issue on Ubuntu or its forked/derived variants.

One thing to bear in mind is that you might easily avoid this issue if you just let the system carry out its processes to the end without interfering.

While this might be a fixable issue, there have been cases of hard-bricked devices that arise from users closing key system programs prematurely.

For example, you really really don’t want to mess with your computer during something crucial like a BIOS update.

Sure, this is a worst-case scenario, but the point remains, you should make a habit of letting your computer take all the time it needs to complete running commands and performing functions.

It might be a little inconvenient, but the alternative could be a lot worse.