The Unfolder
HomeAndroidHow to take screenshots in restricted apps on Android 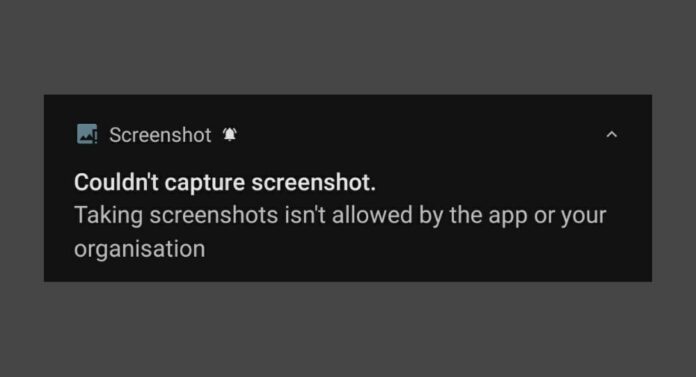 Android is praised because of its customizations and features. Also, it gives the users options to do a lot of stuff on their devices.

However, the platform can sometimes restrict you from performing certain actions, like taking screenshots.

This can become very much frustrating when you really want to capture something on your screen, but the app doesn’t let you do it.

Earlier it was easy to bypass the restriction by using Google Assistant or a screen recorder. But now Google has patched all those solutions, so those methods won’t work now.

But don’t worry. We have created this guide to help you take screenshots of restricted Android apps.

This method will let you take screenshots without rooting your phone. However, keep in mind that it won’t work on Netflix, Prime Video, and other media streaming services.

You can use several screen mirroring applications to capture screenshots from your phone. I will use the scrcpy tool. It’s free and gets the job done quickly without any hassle.

This method might not work on streaming apps like Netflix, Prime Video, and others. However, it works pretty well on apps like Snapchat, Chrome’s Incognito tab, Authenticator, and more.

1. First of all, connect your device to your computer and enable USB Debugging.

2. Download scrcpy and extract the ZIP file on your computer.

4. Allow USB debugging on your phone when prompted.

5. It will instantly mirror the android screen on your computer.

Now, you can easily take a screenshot of any app from your computer.

So that’s how you can take a screenshot on restricted Android apps.

This is one of the easiest methods and does not require root access.

However there are other methods to take screenshots of protected apps, but the steps are quite complicated and need root access on a device, so I have not mentioned them here.

Also read: 5 Most Secure and Private Messaging Apps for Android

I hope this method worked, and you got your desired screenshot, but if you face any issues, let us know in the comments below so that we can help you out.