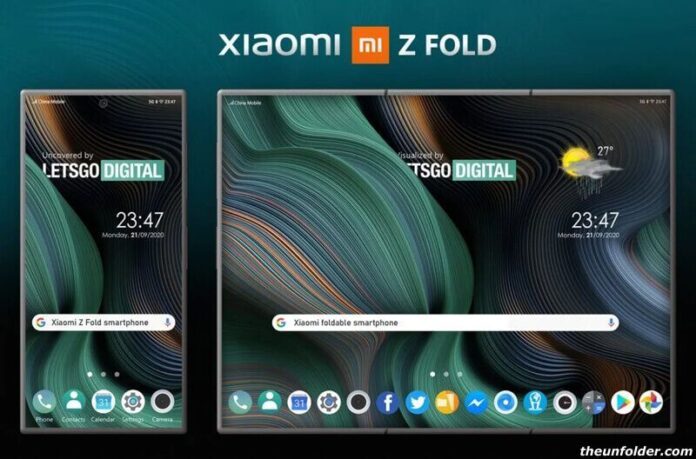 Earlier this month, a leak suggested that Xiaomi might launch a flagship smartphone powered by the Qualcomm Snapdragon 875 processor in the first quarter of 2021. Now, there are some rumours about Xiaomi introducing a new foldable phone in early 2021.

According to a LetsGoDigital report, Xiaomi has been working on a foldable phone prototype with a design similar to the Galaxy Z Flip. The prototype was unveiled back in 2019. However, that device was never launched commercially.

It is now claimed that Xiaomi has been working on a new prototype with the design being similar to Galaxy Z Fold.

Also, Xiaomi has been looking forward to building a smartphone that can be folded twice. Xiaomi has even filed a patent for a double-foldable phone. The device will have a massive screen due to its double-folding behaviour.

Xiaomi had filed a patent for a foldable phone with the design closely resembling Galaxy Z Fold in March 2020.

The approved patent showed various sketches of the prototype from all sides. It is a double foldable phone with a large flexible design.

When closed, it has a display on the front as well as on the back. When opened, the front and back screen is a part of the same large screen. The device has a tiny hole-punch camera on the front screen.

However, the rear camera can only be used in the tablet format as the only camera visible in the smartphone format is the hole-punch camera. The rear camera setup gets hidden between the front and the back screen.

It is quite evident that foldable phones are the future. With the significant initiative taken by Samsung with its Samsung Galaxy Z Flip, now Microsoft, Motorola, and LG have launched their version of foldable.

Samsung has been the flag bearer of this segment with multiple devices- Z Flip, Z Fold and Z Fold. Although this is only the 2nd generation of foldable, still we can hope that companies will come with better phones at more affordable prices.

With the intervention of Chinese companies in this segment, the competition has increased severely. So, we can hope that we can soon get some excellent foldable phones at a lower price in the upcoming years.