The Unfolder
HomeLeaksRealme C17 specifications leaked ahead of September 21 launch 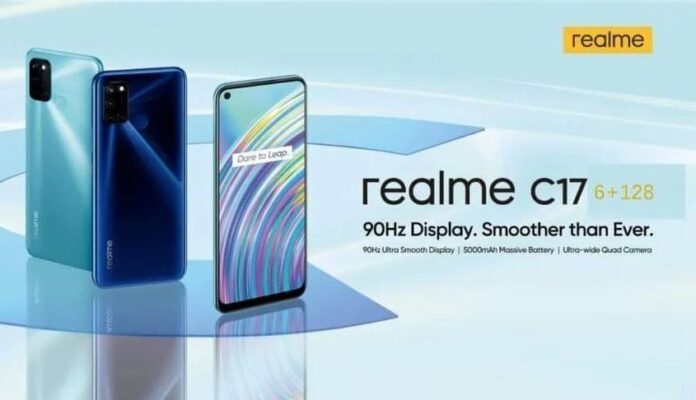 In an Instagram post today, Realme announced that Realme C17 would make its global debut on September 21. The company revealed that the phone would be introduced in Bangladesh first.

Realme teased that the display of the phone will have a 90Hz refresh rate.

The virtual launch event will take place at 12 pm (noon) on September 21 (11:30 am IST), and it will be streamed via the company’s YouTube channel and social media accounts.

While Realme has not revealed any details about the phone except the 90hz refresh rate, tipster Mukul Sharma has shared the alleged specifications of the smartphone.

According to images shared by the tipster, the phone will sport a 6.5-inch punch-hole display with a 90 per cent screen-to-body ratio and 600 nits maximum brightness.

Under the hood, the phone is claimed to feature a Qualcomm Snapdragon 460 SoC paired with Adreno 610 GPU.

The phone may be launched in Lake Green and Navy Blue colour options. Information about battery, charging tech, and fingerprint sensor, among others, is still not known.