Vivo V20 SE set to launch on September 24 in Malaysia 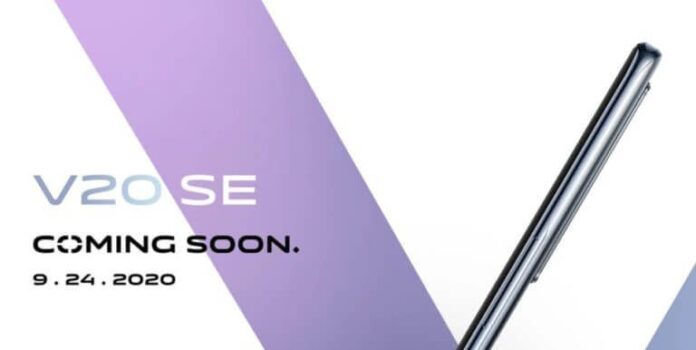 Vivo recently started teasing about its upcoming Vivo V20 SE in Malaysia. Today, Vivo has officially confirmed that the Vivo V20 SE will be made official on September 24.

The Vivo V20 SE landing page on the Vivo Malaysia website reveals that the phone will arrive with Super Night mode and Flash Charge technology support.

The promotional poster shows that the series has two phones – Vivo V20 and Vivo V20 SE.

The Vivo V20 series will feature an AMOLED display with an in-display fingerprint scanner.

The device will feature a dewdrop-notch selfie camera setup, while at the back, there will be a vertical camera layout: the Vivo V20 SE phone and the other phone with Vivo X50-like camera system seems to be Vivo V20.

Recent reports have revealed a third phone named Vivo V20 Pro in the series, but it is unclear whether it will be launching along with Vivo V20 and Vivo V20 SE in Malaysia.

The poster reveals that both phones will be equipped with a 64-megapixel rear camera, 44-megapixel front camera, and 33W fast charging support.

The power and the volume buttons are on the right side, while the SIM tray will presumably be on the left side of the device.

Furthermore, as per a Geekbench report, Vivo V20 SE will feature the Qualcomm Snapdragon 665 processor paired with 8GB of RAM.

This is pretty much all the intel surrounding the upcoming Vivo V20 and V20 SE, but we are sure to receive more information on the same in the coming days. Whenever we do, we will keep you posted on the same.

What are your thoughts on the upcoming Vivo V20 and Vivo V20 SE? Do let us know in the comments section below.