The Unfolder
HomeAnnouncementsMediaTek announces Dimensity 9000 based on 4nm process 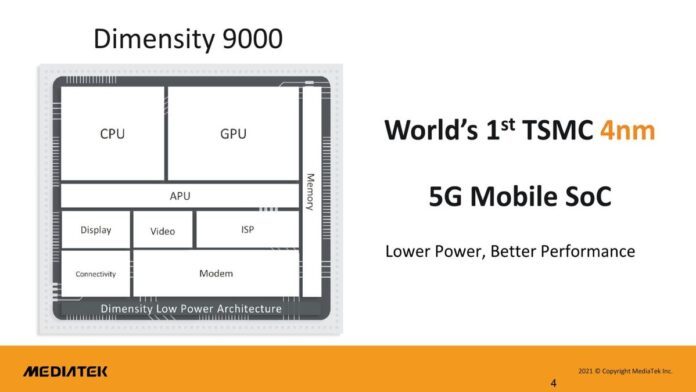 MediaTek recently announced the Dimensity 9000, a 4nm processor flagship-level processor. This is surprising since MediaTek has always been the second choice for those who crave raw performance.

The Taiwanese company had given up on flagship SoC years ago after the launch of the Helio X20 and X30 chipsets. Since then, they have shifted their focus to mid-range and low-range devices.

But in the last two years, MediaTek has grown rapidly and managed to get more than 40% market share. Maybe this is the reason why the Taiwanese SoC manufacturer is trying its luck once again.

Talking about the Dimensity 9000, it is the first chip to feature the ArmV9 SoC with Cortex-X2, A710’s, and A510’s CPUs paired with the newly released Mali-G710 GPU. It also happens to have the first processor by TSMC based on the 4nm process and support for LPDDR5X.

On the GPU side of things, it is the first SoC to feature the Mali-G710 GPU. Comparing it to other products, it offers performance roughly equivalent to that of Google Tensor G78MP20 GPU along with possible 20% performance improvements thanks to the smaller node.

The GPU will reportedly compete with the upcoming Snapdragon and Exynos processors. All in all, the Dimensity 9000 looks like a strong processor that might power several 2022 flagships. However, the lack of mmWave will make it less lucrative to those living in the United States.

With that being said, are you excited for MediaTek Dimensity 9000? Let us know what you think in the comment section below.