The Unfolder
HomeNewsRealme C12 & Realme C15 set to launch in India on August... 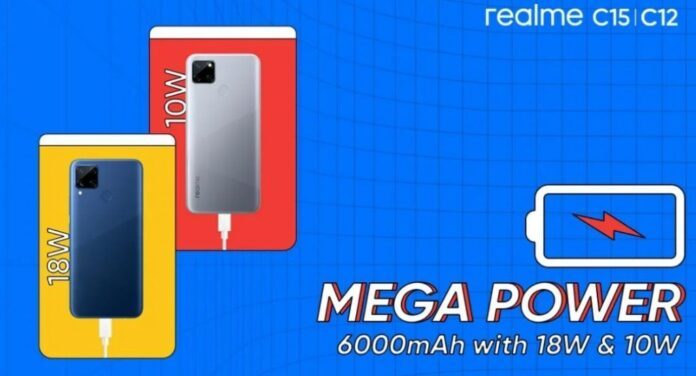 Realme has announced it will launch two new smartphones on August 18 in India. The upcoming smartphones Realme C12 and C15 will be part of the popular Realme C-series. Both of the devices will come with a 6,000 mAh battery powered by the same Mediatek Helio G35 processor. The Realme C15, on the other hand, was already launched in Indonesia for IDR 2,199,000 (~ Rs. 11,100). But we may see a different price for Realme C15 when it arrives in India.

So, here are the key details about the upcoming Realme C12 and C15 smartphones.

The Realme C12 will feature a 6.5-inch IPS LCD display with HD+ resolution and a waterdrop notch.
In terms of processing power, Realme C12 runs on a MediaTek Helio G35 octa-core processor.

Realme C12 will be available with 3GB of RAM and 32GB internal storage. As usual, the storage capacity will be further expandable via a microSD card.

Recently, the company revealed that the C12 camera system includes a 13MP primary sensor with AI features and a couple of 2MP sensors for macro and B/W shots along with the LED flash. The camera setup will also be able to capture slo-mo videos. For selfies, it will have a 5-megapixel camera on the front.

The device will come with a rear-mounted fingerprint sensor and face unlock as well.
Realme C12 price in India is not yet revealed. Last month, the smartphone was unveiled in Indonesia with a starting price of IDR 1,999,000 (~ Rs. 10,100) for the base 3GB RAM + 64GB storage variant.

In terms of processing power, Realme C15 features a MediaTek Helio G35 processor with up to 4GB of RAM and 128GB of storage.

Realme C15 features a quadruple rear camera setup in the camera segment, including a 13MP primary lens, 8MP ultra-wide lens, a 2MP monochrome lens, and a 2MP depth sensor. On the front, it will have an 8-megapixel camera for selfies. Other than that, there will also be a rear-mounted fingerprint scanner on the back.

Realme C15 will feature a 6,000mAh battery, will come with 18W fast charging support. The company claims that the user will get 46 hours of talk time, or 60 hours of music playback or 28 hours of YouTube streaming on a single charge. What’s interesting is that the device will also be able to support reverse charging.

In the software department, both Realme C12 and Realme C15 run on Realme UI based on Android 10.

The Realme C15 will be available in two colour variants, including Marine Blue & Seagull Grey.

Furthermore, the product page for Realme C15 has already been made live on the e-commerce platform Flipkart.