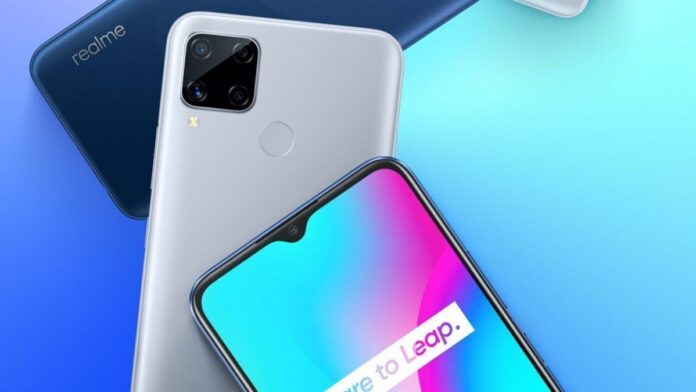 Both budget smartphones are powered by the same MediaTek Helio G35 chipset and come with a 6,000 mAh battery.

Realme also launched Realme Buds Classic (and a T-shirt) in India at the virtual launch event.

Let’s take an in-depth look at the specifications, pricing, and availability of Realme C12 and Realme C15.

The smartphone is powered by a MediaTek Helio G35 octa-core processor and is equipped with 3GB RAM and 32GB storage. As usual, the storage capacity can be further expanded via a microSD card. It comes with a rear-mounted fingerprint scanner.

In terms of camera, Realme C12 includes a 13MP primary sensor with AI features and a couple of 2MP sensors for macro and B/W shots, along with the LED flash. For selfies, it has a 5-megapixel camera on the front.

In terms of processing power, Realme C15 is powered by the same MediaTek Helio G35 processor with up to 4GB of RAM and 128GB storage.

Realme C15 features a quadruple rear camera setup in the camera segment, including a 13MP primary lens, 8MP ultra-wide lens, a 2MP monochrome lens, and a 2MP depth sensor. On the front, it comes with an 8-megapixel camera for selfies.

Realme launched Realme Buds Classic and a Realme T-shirt along with the smartphones.

As for the pricing, Realme C12 is priced at Rs 8,999 for 3 GB RAM + 32 GB storage, and it only comes in one storage variant. The smartphone will go on its first sale on 24 August at 12 PM on Flipkart and realme.com.

It will be available for purchase via Flipkart and realme.com starting from 27 August at 12 PM.